How to Choose the Right Ceiling Fan for Your Space 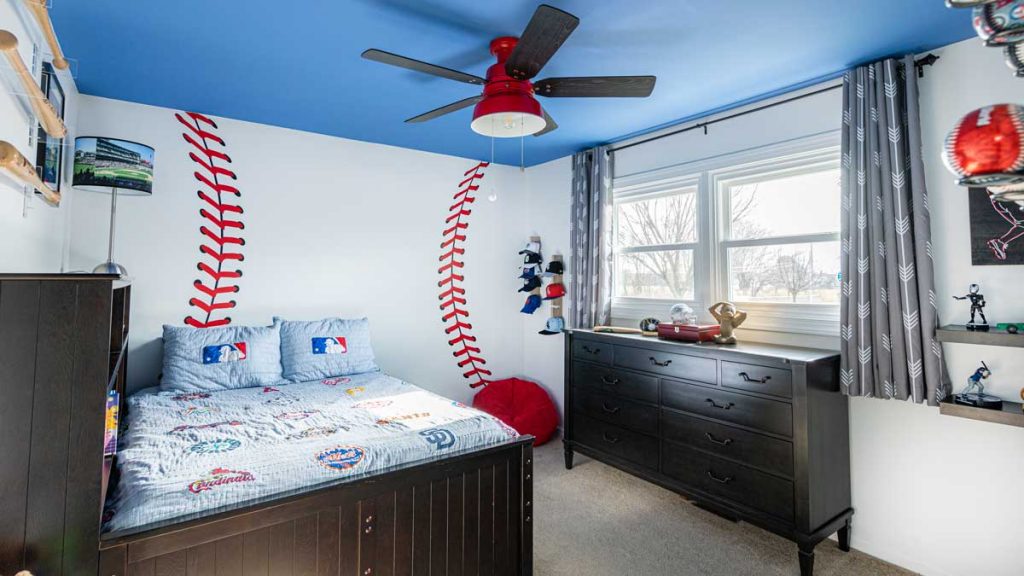 Ceiling fans are probably one of the most sought after ceiling fixtures to help improve airflow in a home, particularly if you’re based in the warmer states or experience hot summers. And, unless you live in a new build property that has modern integrated air conditioning, you’re probably well aware of the benefits that ceiling fans can provide. Ceiling fans are well known for helping us to increase the airflow and coolness of our homes, making them quite sought after. 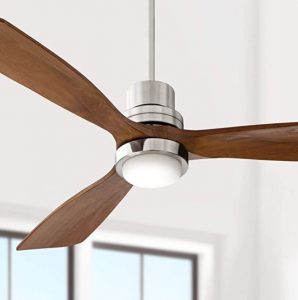 We love this 52-inch ceiling fan as it comes with a central LED light feature, three solid wood blades and opal glass diffuser. A 6-inch downrod is included. Plus, we LOVE the walnut and nickel combination of finishes! Really modern and elegant. Perfect for more contemporary interiors. Remote controlled.

Ceiling fans have come a long way since your grandparents’ days! There are many styles available now. They are also available in a variety of fixture types and finishes, some even have smart technology built-in! With such a selection, there are ranges to suit anyone’s needs, interior style, budget, and preference.

Ceiling fans really are a helpful piece for any home, which is why this week we are looking into more of the details associated with them. Specifically, how you can choose the right ceiling fan for your space.

We have broken this down into sections which are all aspects that should be considered before deciding on which ceiling fan is right for you.

Aspects of the Room to Consider

Before we come to the specifications of the ceiling fan itself, it’s good to examine the room you’re looking to have it installed in.

This modern ceiling fan adds a contemporary feature to any ceiling. It is made from brushed steel and comes with an LED light covered with cased white glass. This fan is multi-speed and reversible to deliver an ultra-powerful airflow with quiet performance. Controlled via the chains.

The questions above are critical ones to have answered before doing your ceiling fan shopping! It also enables you to narrow your search down by size before getting into the technical specifications.

The ceiling fan should be installed in the middle of the room. There should be an absolute minimum of 7 feet between the floor and fan, and 18 inches from the walls. For optimum airflow, it is recommended to install the ceiling fan 8 – 9 feet above the floor.

What to Look for When Choosing a Ceiling Fan

The first section we’re going to look at are the specific aspects of the ceiling fan that should be considered before making a decision. 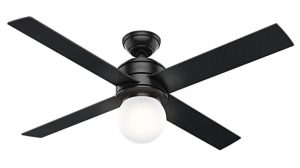 If you’re looking for a black ceiling fan with an integrated light feature, this wall controlled fan could be for you! It is made from metal, comes with 2 and 3-inch downrod, and has a WhisperWind motor to deliver ultra-powerful air movement but with next to no noise. A winner for anyone who’s a light sleeper!

You should consider deciding on the following points:

The number of fan blades doesn’t actually make that much of a difference. However, it is known that fewer blades help to keep the room cooler. A fan with four blades will work just as well as one with five. Generally speaking, a fan with fewer blades turns faster with a stronger motor which therefore creates a good effect of wind chill.

Conversely, the pitch of the fans (degree of the angle of the blade, relative to the fan’s base) is said to be a more important factor. Pitches between 12 – 15 degrees prove to be the most efficient, according to the American Lighting Association. Something to bear in mind when looking at the styles available.

We love the aerodynamic design of this particular ceiling fan! A 52-inch fan with LED light kit, that is remote controlled. This design is also noiseless, reversible motor and 6 speed options, which makes this ceiling fan extremely flexible for any space.

One of the amazing features of installing a ceiling fan is that they can come with light kits. This is especially important if you’d like it to double up as a ceiling light too – making it a 2-in-1 appliance!

Always check what speeds are available on the ceiling fan and how it is operated. It’s good to have a discussion with your family as to how you’d like it to be used when installed. Would you prefer a remote or a switch on the wall next to the light switches? By having a wall switch, there is less chance of losing the remote!

We always recommend that the blade direction of ceiling fans are changeable. This is so you can alter the direction between seasons. Another aspect to consider is the noise of the ceiling fan, particularly for those who are light sleepers. 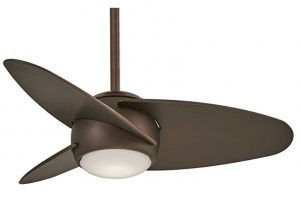 Not all ceiling fans are large and bulky! There are small, contemporary styles available like this one which we totally love! It’s finished in oil rubbed bronze making it a stylish and modern addition to any space… It does have a smaller blade span of 36 inches making it viable for smaller rooms.

When choosing a ceiling fan for your home, the style and color should be chosen in-line with your current interior (unless you’re planning on re-decorating shortly after!) There are many different styles of ceiling fans to choose from, which can fit almost any style of interior.

For modern and contemporary spaces, choose a fan with minimal style blades and a finish that either complement the finishes within the room or that is the same. For example, if you have black hardware you may want to keep that running through the space so black colored blades would work well.

Alternatively, if you’re using chrome hardware and have a lightly decorated room, choosing a white ceiling fan would keep it simple, effective, and complementary to the overall decor.

Where NOT To Install a Ceiling Fan

Luckily, there aren’t that many rooms of the home which fall into this category, but it is still worthwhile having it within its own section.

The most important thing to remember when deciding where a ceiling fan can or can’t be installed is what furniture is within that room. And by that we don’t mean low furniture, what we’re really talking about is large, tall furniture which may come in the way of the fan blades. Particularly cabinet doors. It is also critical not to install a ceiling fan where the blades may pass beneath a light fixture, such as chandeliers etc.

Children’s rooms in particular should be considered greatly. Specifically, it is not recommended to install a ceiling fan in a children’s room where bunk beds are. 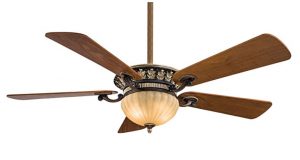 For more classic and traditional interiors, ceiling fans with ornate central features are available like this one. The blades are made of natural walnut, giving off a warm and traditional feel. The fan itself is 52 inches and includes a 6-inch down-rod and angled ceiling adaptor, if necessary for your space. The great thing about this ceiling fan is that it’s controlled from the wall.

Other Things to Consider

It is important to note that if you’re replacing an existing ceiling fan, you will not need an electrician to do this. However, if you’re making changes from a light fitting to a ceiling fan, you may need to seek a professional hand with the work involved.

Therefore, when exploring ceiling fan options, you should also consider the cost involved in the installation if you require an electrician to fit it.

We hope you have enjoyed this blog post and learned more about how to choose the right ceiling fan for your home! Do you have ceiling fans at home? We would love to hear your stories on how you chose them in the comments below!

Have you ever wondered what your interior design style is? Take our Interior Design Style Quiz to find out!

This site may contain affiliate links. Purchasing through an affiliate link doesn’t inflate your cost and helps to support our small business! We would never recommend something we didn’t truly believe in.